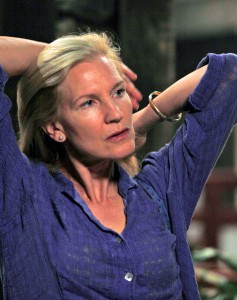 Hannah, recently divorced, is an art history teacher in a rural suburb outside of New York City. When the film begins, she is emptying out her big house to move into a small apartment.

Suzanne studied acting with Shakespeare and Company in Lenox, Massachussetts (and in New York City), and then Roy London, Ken Lerner, and Ivana Chubbuck in Los Angeles. She has appeared in dozens of theatre productions in the Midwest, New England, New York, and Los Angeles as well as short films. She worked in casting for several years with Reuben Cannon and Associates, Divisek Casting, and Barbara Lauren Casting. Projects included casting episodic television shows, film, and tv commercials for the US and Spanish-speaking markets. In addition to playing Hannah in The Hanji Box, Suzanne is co-producer and script consultant. 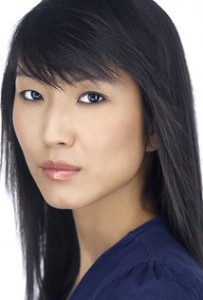 Rose was adopted by Hannah and Robbie when she was an infant. She has moved out of the family home and lives with her boyfriend Kenny.

Natalie is a comedic actress with a full range of dramatic skills. She is known for her comedy webisodic, SuperTwins! and her interview show, It’s A Draw With Natalie Kim (in partnership with Frederator [Adventure Time, Power Puff Girls, Blue’s Clues]). She also wrote and voice acted in the animated series, Kimchi Power (http://bit.ly/1xBTOvD) which premiered on Channel Frederator’s Saturday Morning Cartoons. She has worked with various theatre companies including Ensemble Studio Theatre, Ma-Yi Theatre Company, New Dramatists, Young Jean Lee and The Lark Development Center. TV credits include: The Blacklist, Law & Order. Most recently she shot the black comedy “La Gradua” by independent film writer/director Adrian Manzano. She is a proud member of Playhouse West Brooklyn Lab and studies with Jim Parrack, Andrea Dantas and Leven Rambin. Her website is: nataliekim.com 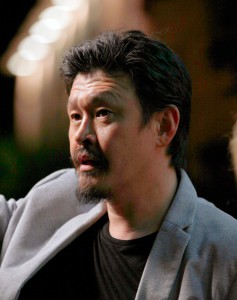 Jung Tae Hee is a Korean painter who has come to New York for the opening of an exhibition of his paintings. A bit of a renegade, he dropped out of art school, and achieved acclaim for his art in Korea.

Born in Toronto, Canada, Daniel Park studied Korean Language Arts at Yonsei University in Seoul, Korea before returning home and majoring in Theatrical Arts at Ryerson University. Daniel has appeared in numerous film and television roles including “Pacific Rim”, “Gangster Exchange”, “The Interview”, and a recurring role on “Bitten”. Daniel has also spent time behind the camera as a writer and producer. His short film, “Daylight Savings”, won accolades at the Vancouver film festival. The role of the Artist, Jung Tae Hee, in “The Hanji Box” is a once in a lifetime opportunity for Daniel and he is beyond excited and grateful for the chance to portray such a diverse character. Outside of acting, Daniel is a devoted father and husband who loves to make his son and wife laugh.

Lily is a Chinese American artist who was Jung Tae Hee’s student in art school. They remained close friends.

Nancy Sun is a Texas-bred, Brooklyn-based actress and writer. She is best known for her recurring role as June, the office assistant of Hector Apostolu (Peter Sarsgaard) on NBC’s “The Slap”. She has previously appeared on the NYC stage in the lead roles of “Red Flamboyant” (World Premiere, Firebone Theatre) and “An Infinite Ache” (NY Premiere, Access Theater). Her recent film credits include “The Dismantled”, directed by Sundance 2013’s Jason DaSilva and “Our Nation”, directed by TIFF 2009’s Derrick Borte. She can next be seen on-screen with Alan Arkin, Michael Caine, and Morgan Freeman in “Going in Style”, directed by Zach Braff. Super grateful for where her creative journey has taken her and all the people she has collaborated with along the way (including on “The Hanji Box”). 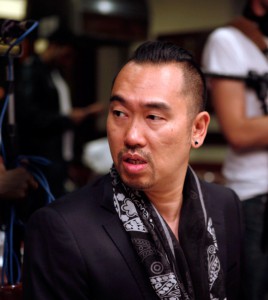 Jim is an assistant art professor at New York University. He and Jung Tae Hee know each other from their art school days in Korea.

Bruce, also known as Master B, is an American professional actor, theater director, film director and martial arts expert.  His acting credits include: SALSA; Macbeth; The Model; Raft of Medusa; In the Boom Boom Room; Speed the Plow; Or,The Whale; GGum; The Hanji Box; Dream Your Dream(SHIN); The Heist (Fall Out Boy); In the Night (the Weeknd),Chopsticks; Mysteries at the Museum.  An alumnus of Lee Strasberg Theatre & Film Institute.  Bruce is a proud full member of Stage Directors and Choreographers Society (SDC) and Lincoln Center Theater (LCT) Directors Lab.  MFA, New York University, Tisch School of the Arts. In addition to his role as an actor, he secured key locations for
our film. 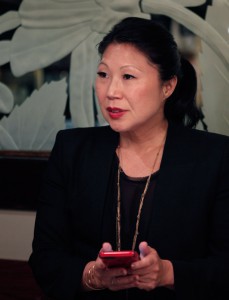 Janet is a Korean adoptee who visited Korea when she was an adult and met Jung Tae Hee.

My love for storytelling began on stage in college, and led me to the Yale School of Drama where I earned my MFA. After graduate school I moved to New York City to pursue my acting career, which led me to Point Made Films where I pursued my love of story, but from behind the camera. I am grateful to have had the opportunity to co-produce my first documentary film “Adopted”, the educational DVD, “Adopted: We Can Do Better” and the third film “In 500 Words or Less”. “The Hanji Box” was my first opportunity to work as an actor again, after several years, and I thank Nora for having invited me to be a part of her project. I believe in the power of film and its ability to provoke discussion, inspire and be a catalyst for change. 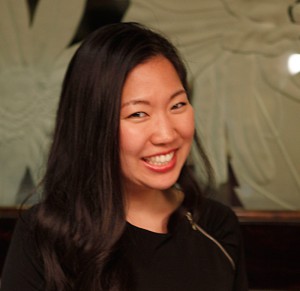 Sunny, Janet’s friend, was born in the US, but her parents are native Koreans.

Born in the Midwest and raised in New York, Hannah Yun is an engineer-turned-actor that is thrilled to be a part of “The Hanji Box.” She received her Bachelor’s and Master’s degrees at MIT while simultaneously pursuing her career in film and television, landing roles in such features as “Bride Wars” and “Unfinished Business,” and happily working on a number of different commercials. She can next be seen as Nicole, the bride of actor Michael Sheen, in the upcoming film, “Oppenheimer Strategies.” Hannah is an avid, lifelong, tortured New York Mets fan. 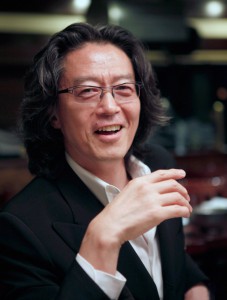 Jun Kim, a native of Japan, is director,  actor, and tango dancer. 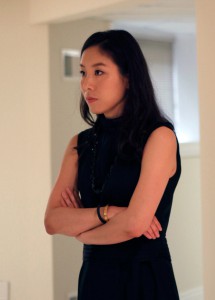 Mrs. Han is a Korean art dealer who has an art gallery in Flushing, New York’s Koreatown.

Sook Hyung Yang was born and raised in Seoul, South Korea and received a BA in Theatre and Film Studies from Dankook University. Before coming to the United States, she worked as a musical actress in Seoul where her works included “Carmen”, “A Midsummer Night’s Dream” and “A Christmas Carol”.  She worked as a broadcaster for Media Korea TV NY/NJ prior to attending The Actors Studio Drama School. Recently completing her MFA in Acting at ASDS, she has been working with many independent filmmakers in NYC.  Recent film credits include “The Hanji Box”, “Guilt & Postpartum”. She finished filming a lead role, Helen, in “Everlasting Life” by independent film writer/director Benjamin Lee. She will be shooting another short film, “Language Barrier” in October 2015.  She is grateful for meeting and working with all the creative and talented people in the US. 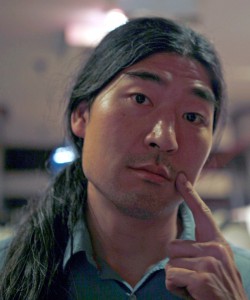 Julian loves Coffee; His Soul Mission/Spiritual Plan to Awaken the World by Awakening himself & To Awaken himSelf by Awakening the World for We Are All One Immortal Love which is The Mind of God. LOVE Ramtha’s School of Enlightenment . 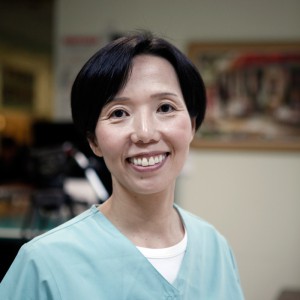 Felice Choi was most recently seen as the Mom in the feature film “Ring the Bell”.  Her other film  credits include the Korean Hairdresser in the “The Wrestler”; a  Chinese Wife short order cook in “Boy Wonder”; and the Mom in “Hello, Goodbye”.  Other recent work includes print commercials and English and Korean-language voice-overs. 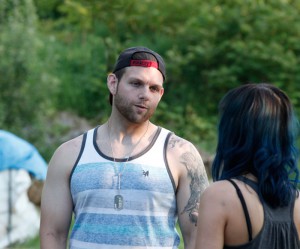 Kenny is Rose’s boyfriend. He is on parole for having defended Rose’s honor in a bar room brawl.

Dario is an actor and social worker. 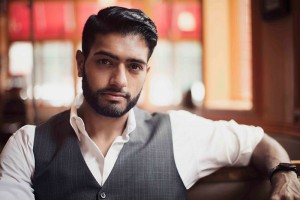 Ravi is Lily’s boyfriend. He is a graffiti artist.

Originally from the often underappreciated Garden State, Manu began performing on stage at an early age. However, he never expected it to be his career. He jumped from politics to law and then finance before finally realizing his passion lied in acting. He has been in numerous stage and film productions as well as national ads for T Mobile and Amazon. Manu has studied acting at the Stella Adler Studio of Acting and improv at Upright Citizens Brigade and The People’s Improv Theatre. Manu is currently
residing in Brooklyn, NY while studying at Playhouse West Brooklyn Lab. 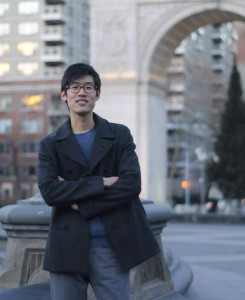 Brian is currently a junior in New York University Stern School of Business, studying finance and accounting. However, his passion lies not only in business, but also in acting and film. As an avid fan of watching movies (regardless of the genres), Brian wanted to be on the other side of movies and started auditioning for extra positions. In the film “The Hanji Box”, Brian played the role of an art student. Since then, he has been actively interested in auditioning for other positions and possibly hopes to utilize his native Korean skills in future positions, if possible. 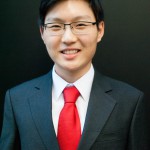 The Korean Business Student has come to the opening to humor his friend, the Art Student.

Born in the U.S., Daniel grew up South Korea and Singapore and is currently attending the Stern School of Business at NYU studying finance and economics. His two primary passions are investing and the media and entertainment industry. In his two years at NYU, he has seen over 50 movies in the theater, and loves playing Chopin and pop music on the piano and drums. He has worked at both an activist and long/short hedge fund, and would like to run his own investment company one day from Singapore, because he hates cold weather.